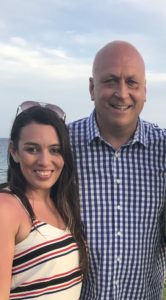 A couple of weeks ago, a few of the recruiters at our firm (Gus Bageanis, Adrian Williams, Art Ivanov and our president, Gary Miller) got to visit Curacao for MRI Network’s annual Pacesetter trip.  This trip is dedicated to the top recruiters in all of MRI Network and its purpose is to recognize the recruiters for all of their hard work and achievements.  Lucky for me, I got to tag along.

While Pina Colada’s by the pool was pretty cool, especially coming from the cold weather in Chicago, the highlight of my trip surpasses all of that.

MRI Network invited Cal Ripken Jr. as our motivational speaker for the trip.  He went through his career as the short stop for the Baltimore Orioles for 21 seasons and 2,632 consecutive games giving us highlights and takeaways on how he became so successful and how he was able to persevere (two Gold Glove Awards).  Some of the things he listed from his book The Only Way I know, that helped him throughout his career were the following:

Now, growing up with baseball in my DNA (figuratively speaking), I mustered up all the courage I had to ask him a question in front of a room full of people.  I told him that I also played short stop in college and then proceeded to ask him if I could play catch with him.  Everyone including Cal Ripken Jr. laughed (as the question was meant to make people chuckle); however, he answered by asking me if I had my mitt.  Never in a million years did I expect him to answer that way so I immediately kicked myself and sat back down.  We then transitioned to a St. Jude’s fundraiser that MRI has been heavily involved in where they auctioned off baseballs signed by Cal Ripken Jr.  Gary Miller (our president) was the first to bid on a baseball.  After Gary raised his hand and was called on to get the baseball, Gary turned over to me and asked me to go and get it.  I jumped up with no hesitation, ran to the stage and waited for Cal Ripken Jr. to toss the ball to me – I played catch with Cal Ripken Jr!  After a couple of tosses, I headed toward Cal for a handshake and the signed ball.  Cal squeezed my arm and told me I had a good arm.  I was so excited that I had the opportunity to do that, not only because he was Cal Ripken Jr., but also because he was legitimately a great guy with great values.  These values inspired and challenged me to be the best that I can be at my job.

Ready to talk? We'd love to hear from you.